*blows off a thick layer of dust*
Wow, I guess I haven't been in here in a long while.  Wow I actually have someone whose decided to "Follow".  That's exciting!  This past week I've been reading a lot of blogs, and it's made me realize that as a crazy opinionated person with a degree in English and a lot to say, that I really should work on that more often.  So I'm gonna try, and I'll hope you uniteallaction, are just the first in a string of future readers.  But now onto the meat and potatoes...

So I was reading a blog post this morning (I don't remember which one otherwise I'd cite it), but this bit I remember quite well as it's stuck out in my mind all day;


"3rd and 4th Edition were struggling to find footing, and as a result were really lackluster"

I'm paraphrasing, the language was certainly saltier, and both 3rd and 4th Editions were being put down considerably.

So this is really just to show off the completed work on the build and paint side of the Jets (well the base for Jet 2 as well), I really think it's some of the best I've done, and Dakka2 is currently my favorite scratchbuilt (Dakka 2's the one with the scenic base by the way) 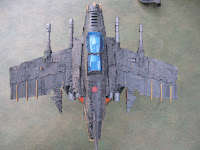 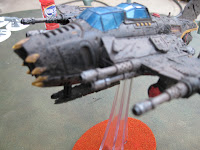 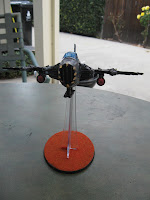 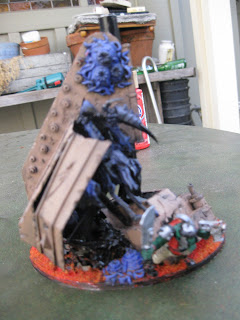 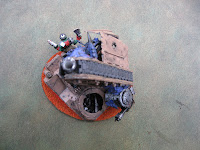 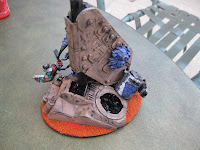 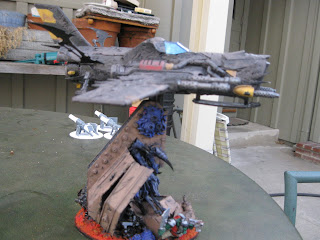 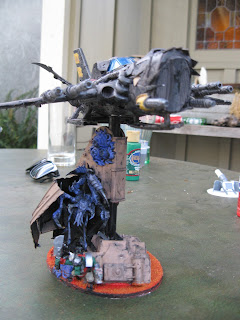 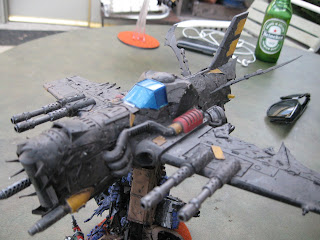 Ugh.  Past few days this projekt has seen multiple setbacks, the worst of which being multiple breakages which force rebuilding, a few stray pieces and multiple real life encurisons when trying to work on this.  As such 46 hours is the current stand, and for that I suppose it is a good amount of work, just not as much as I'd like.

(note hour 40 projekt update is here in the Junkyard thread) 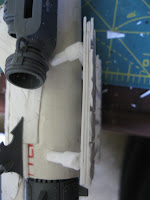 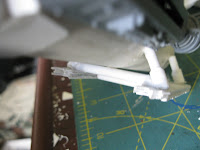 The landing gear built for Dakka 1 has been reappropriated for Dakka 2, it works better here, especially with it modified at an angle, the problem with the landing gear originally was that it broke the speed feel of the model. 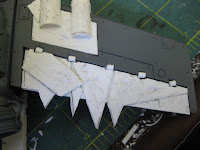 Also have the first side flap of Dakka 2 built up.  It's not perfect, but its not as bad as it could be.  Once the other side is complete the only thing left on Dakka 2 will be to finish plating and then it's complete.  I only pray I don't have to reconstruct anymore of it, otherwise my target completion of the end of the month will be missed. 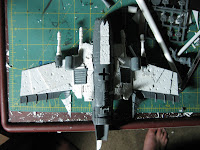 Dakka 1 has been a bit more successful in construction during this time block.  On the right is after 3 or 4 hours in, the left is the current. 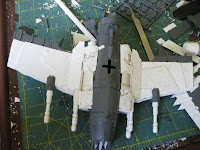 The guns are great, but I'm personally thrilled at the additions of the Leman Russ vents.  The round tanks are from the Leman Russ set as well, originally part of the forward mounted Lascannon.  When I put it together I was originally thinking of them as external fuel tanks, but the more I look at it all together, they look more like ammo drums.  Either case this bird is relatively well.  All that's left for her is finishing the last details on the engines 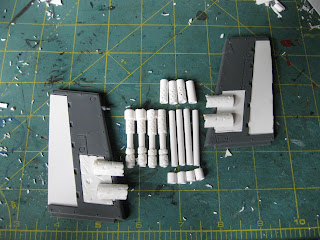 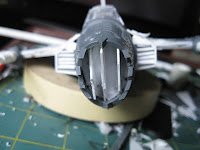 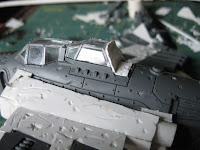 Jet 1's front intake is ready to roll and the canopy work is... well done.  I had originally wanted to do something a little different with the jet, my plan had been to switch the rear canopy around and place a pilot in there, but it just didn't work out.  In any case I dig it, and besides no good conversion ever goes exactly as planned.


The base now has a Killa Kan torso.  It's actually one of my favorite scratch Kans I've ever built, shame he's already dead. 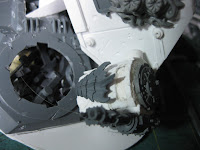 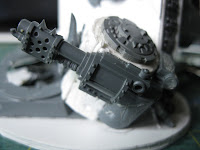 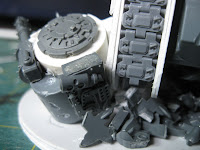 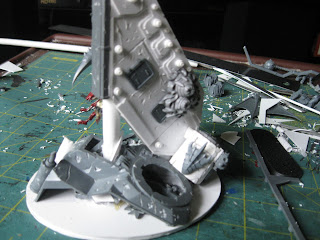 Brushing the Dust off

So I only recently remembered that this blog existed, so I'm brushing the dust off and bringing it back as an excuse to build more shtuff.  Also I've recently realized that I really like the build than post progress, especially because looking where it came from and the evolution of a model's progress is cool.  And who knows, maybe something someone will read.

Currently I'm working on a project for 40konline's Way of the Waaagh's event titled The Junkyard: Gitz it Done Event II.  The Event is a way to encourage participants to complete their Orky projekts that are incomplete and get them to tabletop standard by the end of the month.  My contribution is 2 Jets out of 1 box.

This is where I started the projekt out on the 5th. 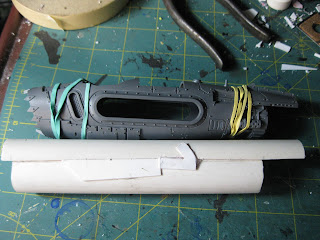 As you can see, not all that impressive.  Just the main body of the standard kit mocked together with rubberbands and 2 length of PVC pipe cut and glued together at close to the same proportions (admittedly not exact, but close).

Now I am 30 hours into the projekt, and they look considerably different.  I'm not going to post all the WIP's here, especially when I've already done so on the Junkyard post.  But I will be posting the current looks, starting with the Base... 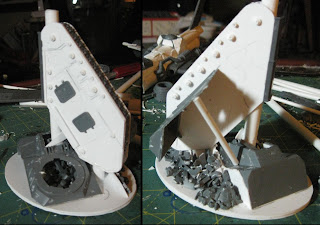 on the left.  Pretty cool huh?  I think so.  I based the base on the old Orky concept of scrap piles, and what better resembles scrap than a blown up Leman Russ and cut up bits of sprue?  (Yes the side of the Russ is scratchbuilt from card).  Anyway shortly after posting my last update on 40konline, I was putting some boxes away, when one fell out of my hands and scattered its contents across the floor of my closet. 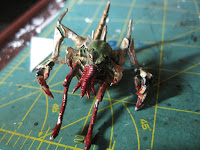 It was there that I rediscovered this old gem I had managed to trade for, an old 2nd Edition era Lictor. I've always been a fan of the Lictor, both as a model in all its incarnations, and from a fluff perspective, but rulewise they've progressively gotten worse every edition.  But this was a chance to rejuvenate the old!

You may note that there aren't legs or the Scything Talons, that's Ok though.  Gives a bit of a challenge. 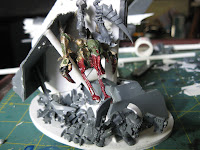 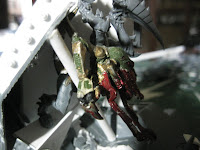 So here I am, plopped him in hanging on to the pipe I had to add as support.  He fit in unbelievably perfectly into the nitch, it's rare something works so easily for me.  The Talons I got in a trade, I think from the Trygon kit, whereas the leg is from the Warriors kit.  I also figured with those cool Flesh Tendrils firing he needed some poor victim around so I put out one of the AoBR Orks (3 piece models that were hard to convert, this is a good use for him.)

If you couldn't tell, working on this one base is a considerable drain on time, but it is quite worth it I think.  At this point the base itself without the flyer would work well as a centerpiece for an army.  But of course there's still a long ways until its finished.

Moving onto the Jets themselves, most of the work on paneling has taken place.  Jet 1 now only needs the undercarriage, specifically under the wings, but is on hold until I figure out the other weapon mounts.  Jet 2 (the scratchbuilt), is about 60% in this stage, the top portion is complete but I still need a bit on the sides.  The bottom can't be done until everything else is so I can find where the center of balance is to attach the pipe.
It was at this point that I realized that Jet 2 felt slow.  Originally I thought this was due to only having 3 thrusters instead of the 5 on Jet 1 and thought about adding a couple extra engines.  However instead of doing that I rumaged through the bits box and found some DE rudders for wings! 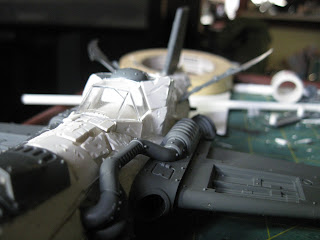 The picture doesn't do it justice, but then again I'm a model builder not a photographer.  The whole thing (especially when the wings are removed) reminds me of the Batman Returns Batmobile, not what I was meaning to build, but nevertheless cool. 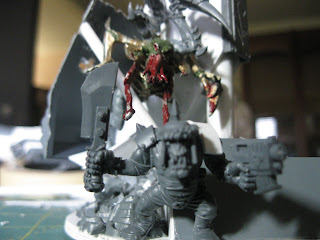 I really need to get back in the habit of posting on here once a week.

On the bright side I have been continuing the work! Firstly I’ll focus on the Kans Dreadnought CC weapons...

Here’s a close up of one of them. Because the new Kans (as well as the old Kans for that matter) have monkey arms that are simply too long I shortened it, as well as cut the back end of the sawblade off, creating a unique CC weapon, that needs only minor GS or Plasticard detailing.

My first leg set is... well done. It isn’t great. They match the dimensions of the original Kan, but without any detailing or complication of the lines it looks, well pretty naff.

My last pic for the day, is the second completed kan 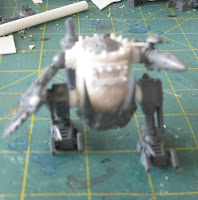 The picture is awful I admit. With this guy I tried a different type of riveting that is far more conventional, the mass application of small cut roundbar. I usually do rivet detailing in painting, but these 3dimentional ones are pretty nice, just real annoying to try and put together.

Been a long time, work at the college as unfortunately taken quite a toll on my free time, which sadly doesn't feel quite so free.

Anyway to congratulate myself for getting an B+ on a midterm (where there was only 1 A and 12 F's) I managed to pick up the 'new' box of Killa Kans (new being a relative term as it did come out earlier this year).

Being used to the old style Ork kits like the Warbuggy and Trukk from the GorkaMorka days I was frankly shocked at the high level of detail inside the kits.

Of course I am never content with building any kit straight, and with this kit I have an extra incentive. When the kit was first released a challenge was made to make at least 5 Kans out of a single box. And I'm gonna meet that challenge.

The first part of the challenge was to find something to build a new main body from.

I think I did quite nicely in that. About a month ago while walking I discovered a discarded piece of PVC pipe just outside a construction site, one end a shattered mess. Planning to find a use for it, I picked it up, and low and behold when cut to size it is the exact dimensions of the new Kan models.

Another early problem would be the 'Worky Bitz' and Exhaust functionality of the Kans located in their backs. The kit supplies 3 of these, each consisting of 2 parts. The obvious solution (as usual) turns out to be the best solution.

These, admittedly aren't the greatest pics in the world, however they show the crucial extension and flippage of the Worky Bitz to get more use out of them while keeping both the mostly kit built and the mostly scratchbuilt at the proper gaming dimensions.

As a last part of today's post I'll show the new backing with this Worky bit power plant on what is quite possibly the least converted mini I've done in a long time. (Although I doubt that this kan will remain as such for long.)